What Is It like to Fly on the Turkish Airlines 787-9 Dreamliner? With my growing loyalty to Star Alliance through my Copa Airlines ConnectMiles Platinum status, I chose Turkish Airlines for my trip from Caracas to Istanbul. The Turkish carrier offers five weekly flights to Istanbul on its Boeing 787-9 Dreamliner. I booked this trip via the airline’s great app, which provides impeccable visual aids and a pricing matrix to choose the most advantageous itinerary. Twenty-four hours before departure time, I tried checking in via the app, but a pop-up message notified me that Caracas wasn’t equipped with mobile boarding pass technology. Therefore, I’d have to check in at the airport. With a scheduled departure time of 1:35 p.m., I arrived at the terminal at 11:20 a.m. to avoid any setbacks. I was swiftly checked in and directed to the AeroVip lounge, adjacent to Gate 23, where the 787-9 was being loaded for our 12-hour trip overseas. After an hour inside the lounge, agents were kind enough to come to my seat to inform me that boarding was about to begin. I approached the gate and was thoroughly inspected by Venezuelan national guards, and was then allowed into the aircraft at precisely 1 p.m. The cabin crew welcomed me onboard and escorted me to 06K, my favorite seat on the Turkish Airlines Dreamliner, as it affords excellent wing and engine views. As soon as I settled in, one of the impeccable flight attendants brought the airline’s signature raspberry pre-departure beverage, always served with thin chunks of fruit floating inside.

Due to the cabin’s staggered configuration, this seat is closest to the window and farthest from the aisle, providing more privacy and comfort. The airline has chosen to fit the front cabin of its 787s with 30 Stelia Aerospace Opal seats installed in a 1-2-1 layout across eight rows. Each seat is cocooned with relatively high walls, offering more personal space. Fitted with an over-the-shoulder seat belt, it turns into a comfortable bed with both armrests tucked in to provide more width. 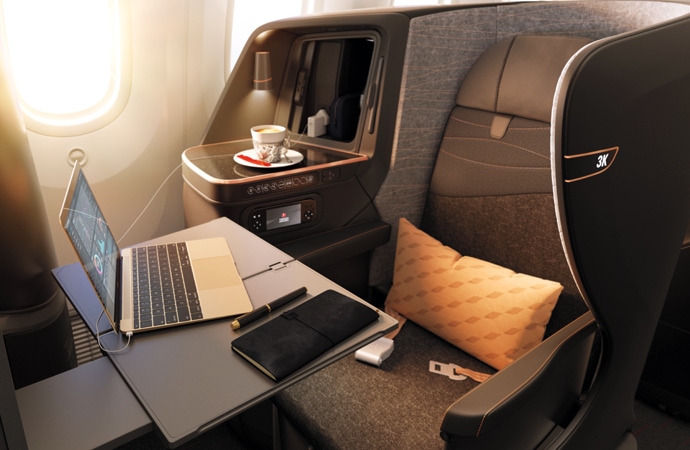 Our plane pushed back from the gate five minutes behind schedule, becoming airborne soon after. Our Dreamliner gracefully climbed through the thin Caribbean clouds to reach cruising altitude. In the meantime, Hackett-branded amenity kits were distributed with Denon noise-canceling headsets, a pair of slippers, and hot towels. The cabin crew initiated lunch preparations one hour after taking off, serving each passenger a beverage of choice and assorted warm nuts. I chose champagne, which was perfectly chilled and appropriate for the midday departure time. I changed my drinks for the main course to San Pellegrino and an outstanding Bordeaux.

On this flight, the crew members were not as quick as on other flights—the appetizer arrived almost two hours after departure, featuring the airline’s traditional Turkish meze. Later, the Turkish Airlines Flying Chef presented my main course of a filet mignon with rosemary potatoes and parsley butter sauce. Unfortunately, it was average at best—the steak was slightly overcooked and dry. However, the bread plate, which comes with a lovely faux candlelight, butter and Turkish spices, was as remarkable as ever. For dessert, I chose the always wonderful Turkish pastry potpourri, which includes versions of baklava—my all-time favorite.

As soon as the cabin crew took away the tableware, I stepped into the lavatory to change into more comfortable clothes for a night of proper in-flight sleep. When I returned, I saw that one of the flight attendants had converted my seat into a full-flat bed with a comfortable cushion and two pillows. I lay down immediately and slept for seven hours. Then, just as we were passing over Naples, Italy, a public announcement from the captain awakened me. It was time for breakfast.

Still feeling full, I asked for a lighter version of breakfast: a rectangular plate with watermelon, pineapple, melon and strawberries, surrounded by three oval containers with vegetables, plain yogurt and cheese cuts. Then, remembering that Turkish Airlines equipped its Dreamliners with espresso machines, I ordered a cappuccino, which arrived beautifully presented in an airline-branded coffee cup.

Arriving in Istanbul during the daytime was a pleasant experience, providing exquisite views of the Bosporus. The aircraft’s IFE, equipped with front-facing cameras, allowed me to enjoy the approach to Istanbul Airport. Our Dreamliner touched down ahead of schedule on the airport’s westernmost runway, forcing us to take the long way to the terminal, which we reached almost 25 minutes after landing. With a connecting flight to London scheduled to depart eight hours later, the airline allowed me to book a private suite inside the main Turkish Airlines Business Lounge. With the possibility of taking a shower before my next flight, the overall connecting experience was superb.

Turkish Airlines is one of the world’s largest carriers in terms of international destinations served. Its current service to Caracas, with five weekly flights onboard its impeccable Dreamliners, and very competitive pricing make it my prime choice for long-haul journeys. However, this flight’s catering service was certainly not up to the standards the airline is known for. But I’m sure the airline’s catering provider in Caracas is doing its best to feed a world-class airline with locally sourced products.