Traveling Back in Time at New York’s Restored Chelsea Hotel

Can the new stewards of the landmark property rekindle its magic? 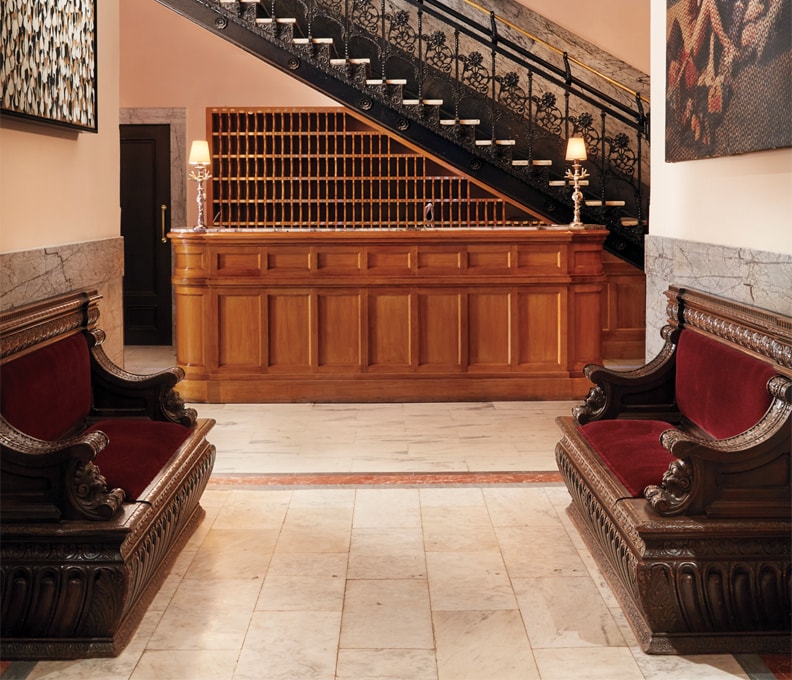 “I remember you well in the Chelsea Hotel,” wrote Leonard Cohen. “You were talking so brave and so sweet.” The celebrated singer/songwriter and longtime Chelsea resident crafted these lyrics about his tryst with ’60s rock star Janis Joplin. Envisioned as an artist’s community, the 12-story, red-brick structure on Manhattan’s West 23rd Street was built as an apartment house in 1884, transforming into a hotel in 1905. Artists-in-residence here have included Tom Wolfe, Brendan Behan, Dylan Thomas, Mark Twain, Larry Rivers, Mark Rothko, Bob Dylan, Harry Everett Smith, Robert Mapplethorpe, Patti Smith, Kris Kristofferson and hundreds of others. Several are noted on the brass plaque at the building’s entrance. Today, after a massive renovation, The Hotel Chelsea is welcoming back guests who want to immerse themselves in its storied history. I recently spent a few days there, just to see what had—and had not—changed. You see, I lived in the Chelsea through the late ’60s and ’70s. Back then, seeing the plaque at the entrance, the famed musicians traipsing through the lobby with their instruments, and the quirky staff who knew everyone’s name, I felt I’d arrived. Artist Andy Warhol filmed Chelsea Girls at the hotel with his superstar Viva, a longtime resident. I rubbed elbows with Warhol muse Edie Sedgwick at filmmaker Shirley Clarke’s penthouse perched atop the hotel. It was magic.

Despite all the glamour, there was a welcoming, brownstone feel to the building. Many of the accommodations featured kitchens (now upgraded with French appliances and beautiful fireplaces). The lobby, showcasing art worthy of a museum and a fireplace with a whimsical art deco motif at its center, became a meeting place for artists, musicians and friends. It was a cherished amenity of the Chelsea long before boutique hotels tried to create similar models.

We all exchanged soulful glances in the hotel’s maddeningly slow elevator and told our stories in the Chelsea lobby; it was a rite of passage. As if that wasn’t enough, the on-site El Quijote restaurant offered room service, a great bar, decent affordable food and a colorful Spanish ambience. The Quijote has also been refurbished, with a coat of fresh paint and a talented new chef and menu. I started my residency in a small room, less than 200 square feet, with a bed pushed up against the French doors. My friends and I would walk over the bed to get to the balcony, where we would people-watch, smoke, and feel like we owned the city. When Stanley Bard, the hotel’s legendary co-owner and managing partner, found out I had a dad who was still in the picture, he called him to suggest he help me upgrade to a suitable writer’s residence.

My next abode was an elegant suite with a beautiful fireplace, a galley kitchen, large living room, spacious bedroom—and an inside bathroom. I was able to enhance the aesthetics with antique furnishings and art chosen from Bard’s secret collection in the basement. To inaugurate my glamorous surroundings, I invited a group of Chelsea stalwarts to my apartment for a housewarming party and a bowl of soup. I threw a bunch of art supplies on a table and we all dug in to create collages. While we were in animated conversation—beat poet Gregory Corso telling us we knew nothing about the sorry state of the universe and our disastrous karma—there was a knock on the door. Artist Willem de Kooning was standing there. I invited him in. He picked up a cigarette carton and began stapling bits and pieces to it, grabbed a pen, outlined a drawing, signed it, and handed it to me. The soup never coalesced, everyone left, and I had an original de Kooning.

Months later, exasperated by the slow elevator, I ran down the stairs. As I approached the lobby, I ran into Janis Joplin sitting alone at the bottom of the staircase looking forlorn. I sat down next to her and asked what was wrong. She explained that she felt alone, she’d never really known love, and no man had ever sent her flowers. “You’re so talented and beautiful,” I said. “Love will come.” A few minutes later I ran into a handsome young folk singer who was excited that Joplin was staying in the hotel and wanted to meet her. “To begin, why don’t you send her flowers?” As is now history, Cohen got to her first.

Like many former residents, after I moved I continued to enjoy the comforts of the hotel as a guest, but in 2007, I feared my home away from home might disappear. The soul of the hotel, Bard, was ousted. He gave discounted rates to the famous and almost famous, accepted art in lieu of rent from down-at-the-heels artists, and set the communal tone for the property.

In 2011, a group of hoteliers bought the iconic property with plans to renovate. Soon hotel rooms were not available, priceless art was stripped off the walls, and the entry doors were taken to the trash, only to be saved by a former tenant who was now homeless. The future looked dismal. Then, in 2016, Ira Drukier, Richard Born and Sean MacPherson of BD Hotels—which operates boutique properties including Manhattan’s Maritime and Mercer—purchased the Chelsea with plans to bring it back to life. This summer, the newly renovated hotel reopened. Walking through the lobby with a member of the Chelsea team—a musician and former resident—and seeing the re-installed art and tastefully refurbished rooms, I breathed a sigh of relief. The one-bedroom suite I viewed had undergone a major face-lift, with a marble-sheathed bathroom incorporating a large soaking tub and rainfall shower. A separate kitchen with chic new appliances and dark walnut cabinets was created next to the living room/dining area. The signature carved marble fireplace is stage center in the living room, surrounded by retro velvet sofas and chairs. A dining table with chairs upholstered in faux tiger is perfect for entertaining, and could do double duty as a conference table. Lighting is ambient, and the large windows let in lots of daylight. The bedroom is vintage Chelsea: elevated bed, good bedding, antique side tables and reading lamps.

A spa and gym are under construction on the rooftop. A bar and a continental breakfast served to guests every morning might be a way to jump-start the Chelsea lobby as a one-of-a-kind destination. The hotel’s longtime residents, including New York City’s nightlife queen Susanne Bartsch, add a touch of color and authenticity to the mix. Hallelujah, it looks like they got it right.