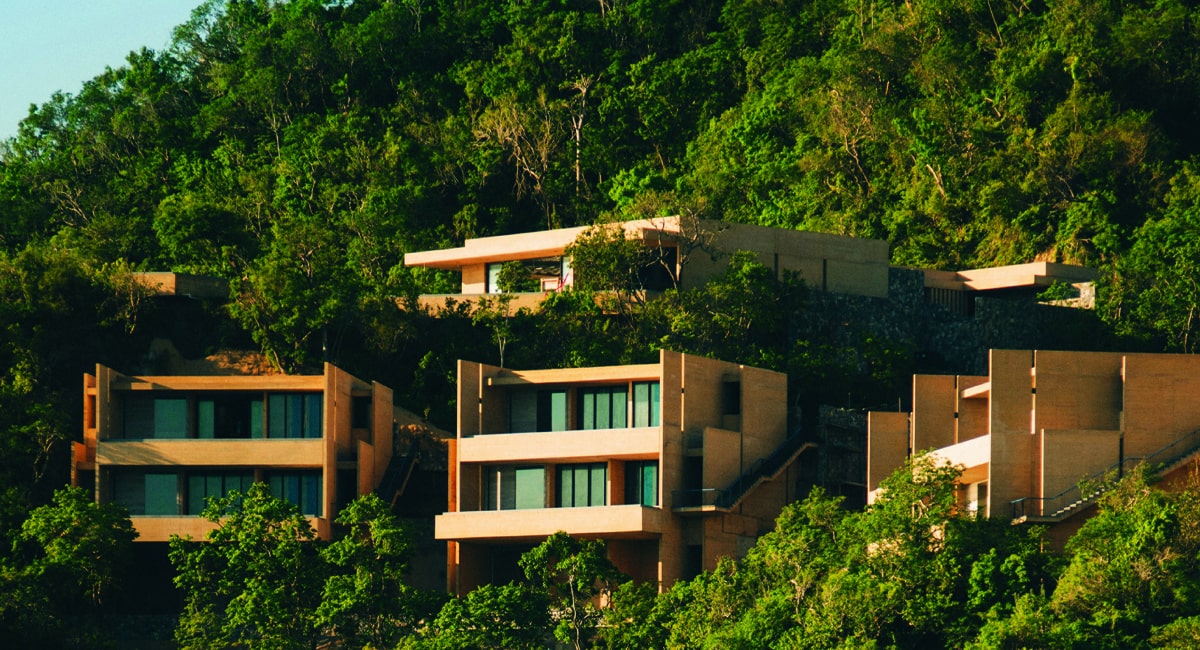 Soundscape ecologist Bernie Krause claims that nature everywhere is becoming troublingly silent. After recording ambient “biophony” for over 50 years, he says that sounds he used to experience routinely—the trilling of cicadas in the African bush, the call of sandpipers in the Yukon Delta—have all but disappeared.

Such signs of nature’s decline are found everywhere. Colorful coral reefs bleach. Entire swarms of bees vanish. There were once 30 million bison across the American prairies, and today there are scarcely 500,000 (up from a low of 325 in 1884). Human progress continues to demolish forests, pave over ecosystems, and pump more and more carbon emissions into the atmosphere, with little regard for complex aftereffects up and down the food chain.

Environmental laws and traditional “let’s go green” footprint-reduction methods of building and operating have only so much impact. That’s why the concept of “rewilding” now feels like such a compelling way forward and through the climate crisis. A progressive method of conservation, re-wilding entails bringing “a piece of property back to its wild state,” according to Dr. Stuart Pimm, the Doris Duke Chair of Conservation Ecology at Duke University. “Rewilding is bringing beavers back into Britain, or bringing 20 different species back to the South African steppe, or the jaguar back to the marshes of Argentina. It’s what medieval Europe would have been like with wild horses.” It’s a romantic idea, using both minimal and highly specific human interventions to reverse human destruction of an ecosystem, and its best examples to date are found in sweeping landscapes. Rewilding’s most famous success stories are in Argentine and Chilean Patagonia, in both regions spearheaded by Tompkins Conservation, the philanthropic body created by The North Face co-founder Doug Tompkins. In Chile, for instance, where Tompkins acquired parcel after parcel of land over the course of several decades, the ambitious 1,700-mile-long Route of Parks now aims to preserve ecosystems and attract responsible tourism—like at the new Explora Patagonia National Park, a luxury lodge where guests can hike by day and enjoy locally sourced gastronomy under the stars for about $1,000 a night. Across the Andes in Argentina’s Gran Iberá Park, Tompkins Conservation’s efforts in conjunction with cash from such tourism operators as &Beyond have helped return multiple species to the Iberá wetlands, some of which had been absent for more than 70 years. It started in 2007 with the reintroduction of the giant anteater, followed by the pampas deer, the collared peccary, the barefaced curassow, the red and green macaw and, ultimately, last year, the jaguar. A landscape that had succumbed to deforestation and commercial farming is now starting to look and feel like it did before human intervention. In the African bush, in states where governments and NGOs alike often lack resources to undertake costly rewilding projects on their own, private companies—and most often tourism companies—play an even more significant role. For instance, Rwanda’s Gishwati Forest, part of Gishwati-Mukura National Park, has suffered a 98-percent reduction in size and canopy cover since the 1970s, which has resulted in landslides, erosion, silted rivers and the disappearance of many species that once lived there, including chimpanzee and golden monkeys. Luxury tourism company Wilderness Safaris purchased a tract of 25 acres and partnered with the Forest of Hope association to develop a nursery just outside the park, which now contains almost 10,000 endemic trees, with the goal of reforesting the area and expanding the park in the future. Similar projects of varying scales exist across the continent, in part because tourism brings revenue streams to places that otherwise may not have any. But in a place like Africa, where so much tourism depends on seeing animals and experiencing the ecosystems at their fullest expression, using the travel industry to fund rewilding is not just a sustainability strategy—it’s also good business. The practice is not without controversy, however. In the Netherlands, at the Oostvaardersplassen nature reserve outside Amsterdam, which covers just 22 square miles, what began as the rewilding of deer, horses and cattle has become a tragic exercise in unchecked population growth. During harsher winters, the die-off of these large fauna sparks protests from animal-cruelty activists. The question then becomes one of scale: How big does a rewilding project need to be to have an effect, and how small is considered too small?

“You have to cover enough ground horizontally and vertically to have a full range of an ecosystem,” says Ben Rawlence, a climate change activist and author of the new book The Treeline: The Last Forest and the Future of Life on Earth. Biodiversity, he explains, thrives in the transition zones between different ecosystems. “You’ll get ten times more birds on the edge of a forest where it meets grassland, and similarly you get more biodiversity where wetlands meet grasslands.”

Getting a rewilding project right is not necessarily about preserving the largest tracts available on earth that most people will never see, such as Patagonia or the African bush. Rewilding exists on a spectrum, and at the other end is the intentional, careful restoration of spaces found much closer to home.

“Every little bit helps at this point. We have a responsibility to restore the ecology of our own backyards, and every bee counts,” says Lily Kwong, a landscape designer who recently collaborated on a series of gardens for JW Marriott. For the JW Marriott Desert Springs Resort & Spa in Palm Desert, California, Kwong looked to Southern California’s landscape for inspiration, filling the space with sages, desert milkweed, desert marigold and other native plants—flora with ancient connections to the surrounding ecosystem and a long history of human use. The garden sits next to the spa, and Kwong’s intention is not only that the use of native plants will be integrated into the spa’s treatments, but also that the garden will attract more endemic fauna such as bees and birds to delight and amuse guests. “Wildlife in a given area evolves with the plant life, and when we design just for personal taste, we’re fracturing that relationship,” Kwong says. “Native plants require a lot less maintenance and a lot less water, especially as places like California face historic droughts. It seems irresponsible to not lead with a native-forward planting palette.”

More and more destinations are seeing the value in allowing indigenous flora and fauna to proliferate. The new Four Seasons Resort Tamarindo on Mexico’s Pacific coast, which sits among 3,000 acres of both private and government-owned biosphere reserves, was designed to completely blend into the surrounding jungle landscape—down to matching the color of its cement to that of nearby beach sand. Reforesting efforts to mitigate the impact of construction are part of the resort’s strategy to protect the region’s 70 endemic species. Over in Destin-Fort Walton Beach, Florida, Okaloosa County has invested more than $10 million in constructing artificial reefs to rewild the Gulf’s coral marine ecosystems, as well as to support a sustainable stream of tourism from diving and fishing. And The Tides Inn in Irvington, Virginia, recently invested in a $3.6 million project to replenish 18,000 square feet of estuary habitat, including the addition of an oyster reef, the preservation of 30 old-growth trees, and the planting of nearly 11,000 endemic shoreline plants. “It is important to note that simply disturbing something and then leaving nature to run its course is not rewilding,” says Nolan McHugh, co-founder of housewares brand Piaule, which expanded into hospitality last summer by opening Piaule Catskill, a small collection of design-driven cabins in Up-state New York. Of the property’s 50 acres, only five were disturbed during construction. The key to rewilding, McHugh says, is rejuvenation. This includes managing invasive species, mitigating deer damage and creating a baseline for endemic species to thrive—unsexy and often costly endeavors.

“At Piaule, we began invasive-species management two years before we began construction, and it will continue as long as we are stewards of the property,” says McHugh. “If humans do not invest time and money into making sure that quality growth occurs, we will be left with invasive species, weedy grasses and low-quality trees that provide little benefit to local ecosystems or carbon capture, further reducing biodiversity and deepening our current crisis.” A future of sustainable tourism requires us to think not only about carbon-mitigating measures such as eliminating plastics and hanging up a bathroom towel for a second use, but also how to bring the places we love back to what they once were. Landscapes, after all, are an enormous part of why we travel—from the wilds of far-flung locales to the beaches of Florida. As seen at the lodges of Patagonia and the safari camps of Africa, sustainable tourism that protects what we have and puts resources back into the planet is possible. Wouldn’t it be amazing to use that model to protect the American prairies, Alaska’s glacial plains or Maine’s Down East coast? The future of hotels is not only about offering convenience and aspirational living, but also about this question: Where would you go, and what kind of traveler would you be, if you knew that your stay was in some small way saving the planet?