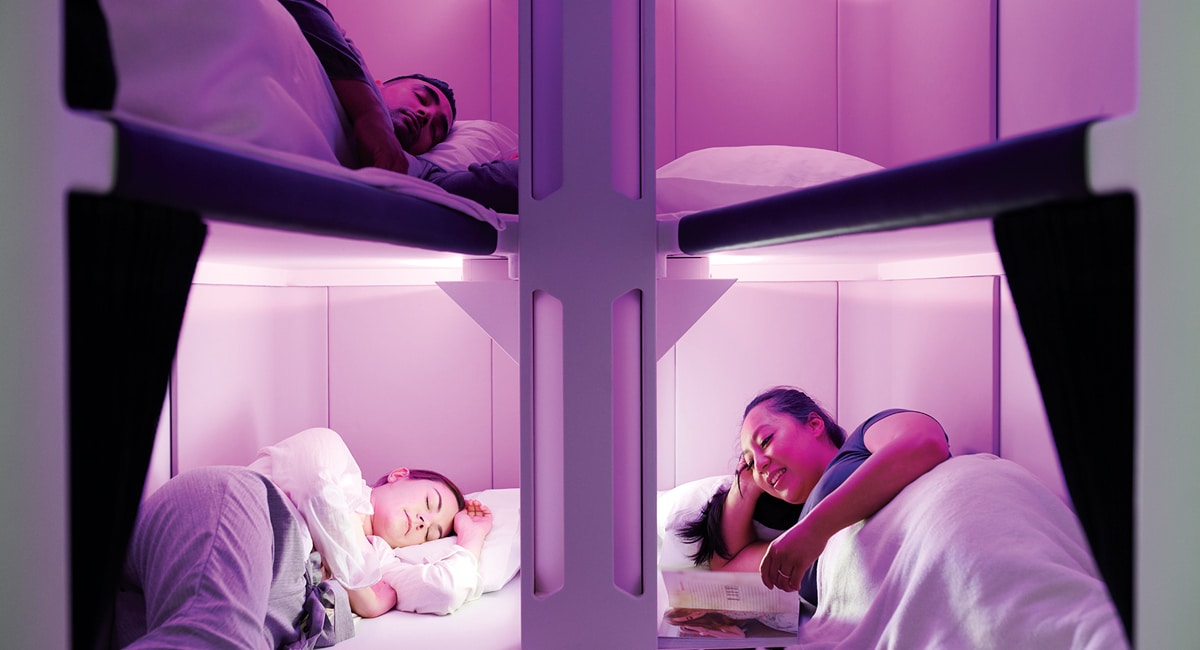 Take a refreshing nap in the Skynest

“Lie-flat” is not a term often thrown around in the same sentence as “economy-cabin seats.” But Air New Zealand—the airline that brought you the venerable Skycouch—is introducing a new economy-cabin sleep-pod concept to long-haul flights starting in 2024. Enter the Skynest.

While it is not a seat per se, it is a possible solution for many economy-seat woes. The Skynest is a work in progress that started in 2019 as part of a general evolution in cabin design by Air New Zealand that will include a new Business Premier Luxe suite, a Business Premier seat and an enhanced economy seat with more storage, added body space and a much larger screen (with added technology) for entertainment. The economy areas will see new Sky Pantries with DIY snacks and libations that passengers can enjoy as desired. Stretching one’s legs will soon include heading to a bunk compartment where back-of-the-plane travelers can lie down comfortably and catch a nap in a private pod.

The Skynest could be a prop out of a Mission to Mars action drama. Each of the six compartments extends approximately 6.5 feet in length and nearly two feet in width. Each pod includes a full-size pillow, sheets and blanket, earplugs, privacy curtains and lighting designed for sleep. Designers are exploring adding a separate reading light and USB outlet for personal devices.

Air New Zealand started on this path three years ago with the introduction of the Skycouch. That economy-cabin seat design involves footrests that can be raised individually or across the row to create an even platform for sleeping or entertaining little ones. But it means booking the row, although without paying full rate for three seats. A quick scan of pricing from Los Angeles to Auckland added $1,400 each way for a Skycouch add-on, making it competitive with an upgrade to Business Premier, but useful if that class is sold out.

The airline has not committed to price points for the Skynest amenity, nor inked a location for these bunks. It has noted that the beds will be rented in four-hour segments. Air New Zealand’s longest flight, New York to Auckland, will launch in September and clock in at 17 hours, allowing for a maximum of 24 passengers to enjoy some private time in one of the six pods.

Air New Zealand will start to reconfigure its small fleet of Boeing 787s arriving in 2024 to include Skynests. The airline will retrofit existing Boeing 787s between 2024 and 2026, but will not be installing Skynests on Boeing 777s.