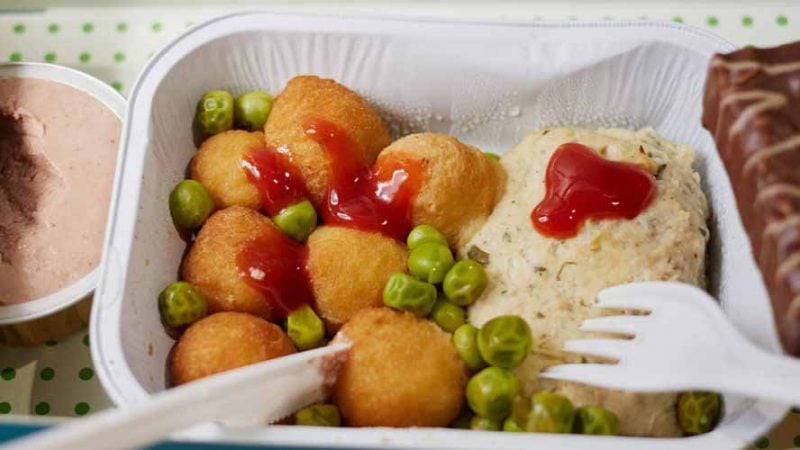 As more than 47 million passengers take to the skies this holiday season some might want to know what’s cooking in the galleys for weary travelers this Christmas.

A study produced by DietDetective.com, Hunter College NYC Food Policy Center and Airlines for America, surveyed the current airline landscape for what passes as healthy food options at 35,000 feet.

Knowing the “best” and “worst” choices is a valuable tool for any traveler, so Dr. Charles Platkin, editor of DietDetective.com and the Executive Director of the Hunter College NYC Food Policy Center. His team looked at the best “Calorie Bargains” and “Calorie Rip-offs” in the US airspace.

• improvement and maintenance of healthy offerings

Alaska and Air Canada shared the top spot this year as the airlines with the ‘healthiest’ food choices in the sky. Delta and JetBlue tied for second.

• Average Calories: The average number of calories per menu item was 373 calories in 2018 and this year it is almost the same at 375 calories. But keep in mind, calories are not everything; the study also looks at the nutrient content of these foods, as well as innovations moving towards healthier, tastier, less expensive and more sustainable choices.

• Food Footprint: Alaska Airlines is the clear leader in making strides to minimize its environmental impact. It was the first to replace plastic straws with paper ones and continues to look for eco-friendly substitutions. Alaska has also launched a #FillBeforeYouFly campaign to encourage flyers to bring their own water bottles and fill them up at water-filling stations in the airport to reduce the use of plastic cups and water bottles on board.

• Sodium Matters: Sodium is often used by food providers to boost flavor, especially in the air where senses can be dulled. The average airline meal contains more than 800mg of sodium, which is more than 40 percent of the daily limit of 2000mg set by the World Health Organization. Also, note that in addition to health-related concerns, sodium can make you feel and look bloated because you retain extra water.

• Short Flights Matter:  The study recommends that airlines provide meals or allow for preorder on shorter flights so that passengers have the option to eat a healthy meal no matter how long they are in the air. A 90-minute flight can easily turn into a five- or six-hour travel experience when factoring in getting to the airport, TSA lines, delays, waiting for the flight to take off, deplaning and getting to the final destination.

• Need to Know: Transparency around food is important for airlines. This means providing an up-to-date version of its menu online with all nutrient information (i.e., calories, fat, carbs, sugar, fiber, protein and sodium), including ingredients.

• Taste Changes in Air: Research shows taste perception changes while in flight. Three factors impacting taste at such high altitudes are the lower cabin air pressure, lack of humidity and loud background noise. In-flight, air is recycled every few minutes and humidity is normally about 20 percent (compared to indoor relative humidity of 40 percent). With lower humidity and air pressure, we’re likely to be thirstier, and there’s naturally less moisture in the throat, which slows the transport of odors to the brain’s smell and taste receptors. Passengers are encouraged to drink a lot of water. More salt, sugar and flavor enhancers (i.e. spices and herbs) are necessary to make meals inflight taste the way they do on the ground.